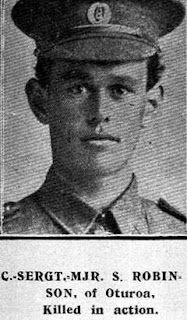 Stanley Robinson (known as Stan) was 21 years old when he enlisted, a farmer from Ngongotaha he stood and 5 feet and 9 inches. (Tall, dark and handsome)

He embarked on the 8 January 1916 and was killed in action at Ypres in Belgium on 31 July 1917 (he was 23 years old) during his short service Stan was promoted from Private to Company Sergeant Major.

On the 15 June 1917 he was awarded a Distinguished Conduct Medal for conspicuous gallantry and devotion to duty.  He displayed great gallantry and leadership during operations, performing consistent good work throughout. Great qualities in a man so young. No doubt had he survived the war he would have led a happy and successful life.
Posted by Helen Vail at 11:58 AM