Alfred who had been wounded twice was serving with the Machine Gun Corp when he was killed in action at Havrincourt on the 13 September 1918, he was 31 years old.

Miraculously all of her other sons/son in laws survived the war.  Although none of them were left unscathed by the experience either being wounded or sick at some point during the war. 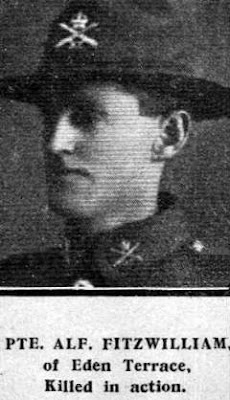 Below is a report from the Auckland Weekly News praising the efforts of Mrs Fitzwilliam's  sons:

FITZWILLIAM - Good service in the cause of the Empire has been performed by the sons of Mr & Mrs A Fitzwilliam of Eden Terrace. Sergeant Alfred H FITZWILLIAM, who was killed in action at the age of 31, was born and educated in Auckland, afterwards following farming pursuits at East Tamaki. He enlisted in the Main Body and was wounded once on Gallipoli and again in France. Private Robert FITZWILLIAM also fought with the Main Body on Gallipoli and was later invalided home. Corporal Fred A FITZWILLIAM is at present in France, with the 31st Reinforcements, and Trooper William BELLINGHAM, Mrs Fitzwilliam’s eldest son by a former marriage, will return home shortly after service with the 19th Reinforcements. Two of Mrs Fitzwilliam’s sons in law, Private John MILLEN, of the Main Body, and Quartermaster Sergeant Steve PERRIN, are at home invalided. Two sons have been rejected for service. [AWN 10.10.1918] p.19
Posted by Helen Vail at 1:45 PM