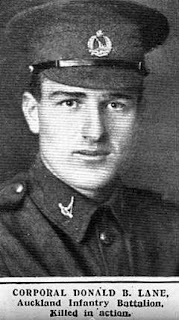 Donald Bennett Lane was the eldest son of Mr William Lane editor of the Auckland Herald.  He had been an Auckland Grammar boy, studied agriculture at Lincoln Colege in Christchurch and had been gaining surveying experience in Hamilton at the outbreak of War in 1914.

Like Private Russell below he left for war on the 16 October 1914 with the Auckland Infantry Battalion most probably on-board the Waimana.  Donald Lane was killed on the Battle of the Landing on the 25 April 1915.  On his Cenotaph record held by the Auckland Museum it states that Corporal Lane in spite of being wounded in the arm and thigh, led a bayonet charge before being shot dead.
Posted by Helen Vail at 1:33 PM