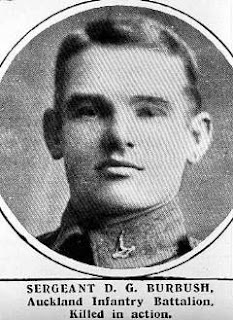 David Gordon Burbush was one of four brothers and the son of  Frank and Catherine Burbush, of Hamilton, New Zealand who served in World War One.  David a Draper in Hamilton was the first of the four brothers to embark leaving with the Main Body on the 16 October 1914.  He was killed in action at the landing on Gallipoli on the 25 April 1915.  He has no known grave and is remembered on the Lone Pine memorial.

His two brothers Frank Alan and Rob Roy McGregor Burbush followed shortly after their brother David's death embarking on the 9 October 1915 with the 7th Reinforcements.  They both survived the war.

Lastly George Edgar Burbush embarked on the 12 June 1917 and sadly died of his wounds on the 27 October 1918 most likely at Quesnoy and only days away from the end of the war.  He was 22 years old.  He is buried along with 19 other New Zealand soldiers in the pretty Vertigneul Churchyard in Romeries.

The Burbush brothers represented the earliest pioneers of New Zealand.  I found a newspaper entry which mentioned that the brothers were the great-grandsons of John Kerr of Murchison in the South Island the man who claimed to have first driven a plough in the soil of the South Island.

I have wondered what the Burbush brothers connection was with Palmerston North was.  Does anyone know?
Posted by Helen Vail at 12:02 PM