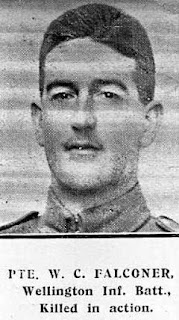 
Private William Charles Falconer a Telegraphist at the Eltham, Post Office before enlisting early in the war on 12 August 1914.  He embarked with the Main Body aboard the Arawa on 16 October 1914 with the Wellington Infantry Battalion.

It was aboard the Arawa that Private Falconer is accredited with first receiving a message which led to the destruction of SMS Emden, a German Imperial Navy light cruiser, which was raiding Allied shipping in the Indian Ocean and became the scourge of the Allied navies.

At the begining of November 1914 the Australian and New Zealand troop convoy was making its way to Gallipoli with a heavy escort when on 9 November the Emden captured a British radio station on Direction Island in the Cocos Islands.   The radio station managed to send out an SOS message before it was captured despite attempts by the Emden to block it.  It was claimed that message was received and picked up first by Private Falconer aboard the Arawa.  As a result the Australian light cruiser, HMAS Sydney was dispatched and the Emden was finally destroyed.  A more detailed account of the Battle can be found at the link below:
http://militaryhistorynow.com/2013/05/08/the-kaisers-pirate-ship-the-unbelievable-voyage-of-the-sms-emden/

In New Zealand and especially in Taranaki the papers were full of praise for Private Falconer:
‘The following regimental order was issued by Lieut.-Colonel Malone, of Transport No. 10, immediately after the destruction of the Emden by the Sydney: "The O.C. troops wishes to draw attention to the fact that so far as is known the Arawa was the only ship, and certainly the only transport, to pick up the wireless message from Cocos Island which eventually resulted in the destruction of the Emden. The credit is due to Private Falconer, Wellington Infantry Regiment and Wireless Operator Raw. The former was on wireless duty at the time, and although unable to read the message in its entirety, picked up the words "S.0.S." and "Strange warship at entrance." He at once woke Wireless Operator Raw, who (although the Emden tried to block communication) managed to read the Cocos message through the Emden block. The information was passed through the Maunganui to H.M.A.S. Melbourne, and resulted in the destruction of the Emden. It will thus be seen that Private Falconer’ vigilance and attention to duty, and Wireless Operator Raw's ability and knowledge of his work achieved very important results, and should serve as an incentive to all ranks to do thoroughly whatever work is entrusted to them."’
Feilding Star,  26 January 1915

'...So Taranaki has had a hand in the destruction of the warship which for a long time was a dread to the Pacific'
Hawera & Normanby Star, 16 December 1914

Private Falconer was sadly killed in action at Gallipoli on 8 August 1915 and is remembered on the Chunuk Bair (New Zealand) Memorial, Chunuk Bair Cemetery, Gallipoli, Turkey.  For his family to make matters worse his brother Lake Falconer, who was serving with the Australian army, was tragically killed around the same time between 6 August and 9 August 1915 and he is remembered on the Lone Pine Memorial at Gallipoli.