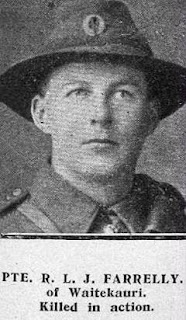 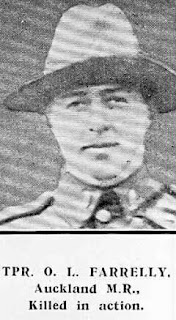 Rupert Laurel James Farrelly (known as Dick) was one of three sons of Robert Goodfellow Farrelly and the late Clara Maria Farrelly.  He enlisted on the 24 August 1915 at Lauriston near Christchurch where he was employed as a Farrier.  His brother Oliver Lawrence Farrelly had embarked with the Main Body on the 16 October 1914 and was killed in action on 8 August 1915 a day which has been described as 'the blackest day on the Peninsula'  by Fred Waite the first New Zealand Historian of the Gallipoli campaign. I imagine that Dick had known of his brothers death before he enlisted and felt compelled to enlist.

Dick served with the Otago Infantry Regiment, 2nd Battalion in France and on the 23 August 1918 he was killed in action also at Bapaume in France.   A double blow for his family like so many other families who sent several sons to war.

Their father Robert had been the news agent and stationer at Waitekauri near Waihi and Dick had served for 3 years with the Ohinemuri Volunteers before leaving the district, hence their connection with Waihi.

I came across a newspaper article which alluded to the fact that all three sons and their father served in WW1.  On further investigation this proved to be correct.  Cecil Goodfellow the eldest of the three sons born in 1881 was most likely called up and enlisted on 15 August 1918, only a few days before his brother Dick was killed in action. Cecil never served overseas.

I thought it rather strange that their father served as I would have thought him too old.  A quick look at his military records explained it all.

Robert Farrelly had lied about his age stating he was born in 1870 (which would have made him 11 years old when his first son Cecil was born!) He claimed his two sons Cecil and Rupert (Oliver having been killed before he enlisted) had been born in 1896 and 1899 respectively.  Several sources prove this to be incorrect (CWGC records, Centotaph records and their Military service records show the facts, that the two brothers had been born in 1881 and 1884 respectively).  Robert enlisted on the 2 October 1915 shortly after the death of Oliver in Gallipoli no doubt driven by grief I am sure he felt determined to do his bit.  He served in the Quartermaster Stores at the Trentham Military Camp for the duration of the war.

On a more positive note Cecil Farrelly married in 1914 and had a son on the 26 November 1917 which he called Oliver no doubt after his brother Oliver who had died at Gallipoli. 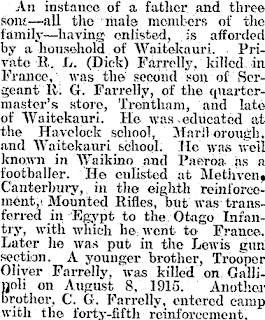