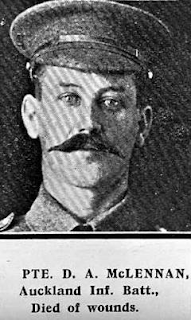 Donald Alexander McLennan interested me because he was killed between Mudros (port of Lemnos) and Gallipoli. I visited Lemnos an idyllic Greek Island many years ago. With a bit more research I discovered that a Troop Ship the SS Royal Edward sank on the day of Mclennan death. (13 August 1915) It was sunk by a U boat of the coast of Mudros with heavy loss of life. It seems likely this is how he died he was 36 years old. What is also poignant is that he had only left NZ 4 months previous. I love Donald's moustache! He was not married but I am sure the he would have been popular with the fairer sex with those good looks.
Posted by Helen Vail at 12:42 PM