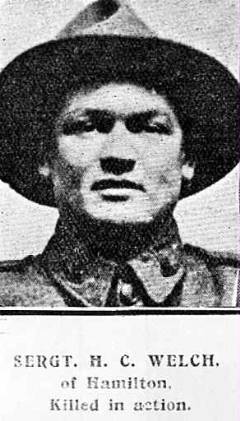 Henry Clarence Welch (known as Tat) enlisted with his brother George Carlton Welch both were the sons of George Edward and Jane Welch of Komakorau.  They embarked together on the 5 January 1916 with the New Zealand Rifle Brigade, 4th Battalion, A Company and it is likely they served together on the Somme where George was killed in action on 3 October 1916,  he is remembered at the Caterpillar Valley (New Zealand) Memorial, Caterpillar Valley Cemetery, Longueval, Somme, France, he was 21 years old.  It is hard not to wonder if his brother Henry was with him when he died.

Henry Welch went on to win a Military Medal when a raid was carried out at midnight on 17 December with the primary aim being the close examination of the enemy's support line as well as his forward trench at a salient known as "Corner Fort."  The raid was led by four officers and 182 men of other ranks.  According to the New Zealand Rifle Brigade History the raid was a success with only one man being killed and four injured.   Sergeant Welch's Citation is below:

London Gazette, 19 February 1917, p1757, Rec No 522: "For gallantry and special good work during the raid by the 4th Battalion, 3rd New Zealand (Rifle) Brigade on the enemy trench at Corner Fort, south of Fleurbaix on the night of the 17th/18th December 1916. Though heavily bombed when he first entered the enemy trenches he led his party with great skill, silencing the party exposed to him, killing a number of them, and finally capturing 5 prisoners."

I am certain George was never far from Henry's mind as he continued to fight on in the war.  Sadly, Henry too was killed in action on 10 May 1917 at Messines he was 23 years old and is buried at St Quentin Cabaret Military Cemetery, Heuvelland, West-Vlaanderen, Belgium.
Posted by Helen Vail at 5:42 PM