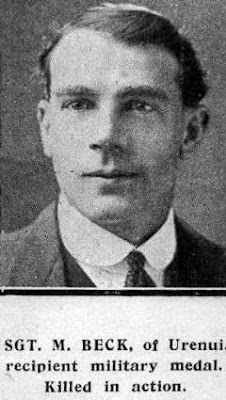 Sergeant Matthias Beck is another reminder of how ordinary men are capable of brave and selfless acts.

Beck was born in Ormondville, Hawkes Bay in 1887.  He embarked with the Wellington Infantry Battalion on 9 October 1915 with the 7th Reinforcements.  At the time of his enlistment he had been a bush contractor in the Urenui area, North Taranaki.

After being gassed at St Yves Beck was out of action rejoining his unit in the field on 29 August 1917.  He was killed in action at the Battle of Broodsiende on 4 October 1917 he was aged 30.  Sergeant Matthias Beck like many is remembered on the Tyne Cot Memorial, Belgium.

Below are the citations of Sergeant Beck's awards taken from a book by Wayne MacDonald, Honours and Awards to the New Zealand Expeditionary Force in the Great War 1914-1918.

Messines offensive - 7th-9th June 1917. At Messines on 7th June 1917 this NCO did most valuable work. His Officer was wounded when attacking a number of the enemy who were fighting from shell holes. With the 12 men left in his platoon Sergeant Beck then took charge and pushed the attack with such boldness that over 50 were killed with rifle and grenade and the rest driven off. He did good work during the remainder of this operation and had previously proved himself a bold and capable patrol leader.

At ST YVES on 24th June 1917 this N.C.O. was the platoon sergeant of a platoon working as a carrying party. That evening the whole area and the saps were under a very heavy bombardment, with both gas and ordinary shell. Two men were buried by a shell, and Sgt Beck, with another man immediately went to the rescue without thought of his own safety. Finding he could not get them out quickly enough working with a respirator on, he took off the respirator, knowing the risk, with the result that he was gassed. Though feeling the effects of the gas, on the platoon commander also becoming a casualty from gas, and saw that the task of the platoon was finished before he was evacuated. His previous record is excellent and he was awarded the Military Medal for gallantry at MESSINES.