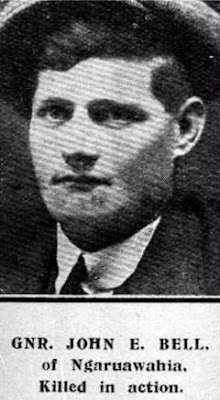 John Edward Bell and Alexander Law Bell were brother's and the only two sons (that I can find) of Edward and Mary Bell of Ngaruawahia.  They embarked together on 17 April 1915 from Wellington with the 4th Reinforcements.  They had in fact enlisted separately John at Urenui in Taranaki and Alexander at Taupiri in the Waikato.

Both would have served during the Gallipoli Campaign where John Bell was wounded on 4 October 1915.  After Gallipoli the next stop would have been France and Belgium.   I have not as yet been able to access Alexander Bell's military record however, I assume that at some point he was either wounded or fell sick as he returned to New Zealand sometime during 1917.   On his Cenotaph record it is clear he reembarked again with the 32nd Reinforcements, New Zealand Field Artillery (NZFA) on 21 November 1917.

Sadly on 17 June 1917 John Bell was killed in action in Belgium (he too served with the NZFA) he was 27 years old.  I expect the death of his brother made Alexander Bell's return to the Front a very poignant one.  Alexander himself died of his wounds on 9 August 1918 in France his age at death is recorded as 21 years on his CWGC (Commonwealth Grave Commission) entry.  I checked to see when Alexander's birth was registered and it is recorded as 1897 which would mean he was only 17 or 18 years old when he enlisted, he no doubt lied about his age when he enlisted.

The story of brothers not returning is unfortunatley a common one of World War One.   On the Ngaruawahia memorial alone there are five sets of brothers recorded who gave their lives.
Posted by Helen Vail at 10:28 AM