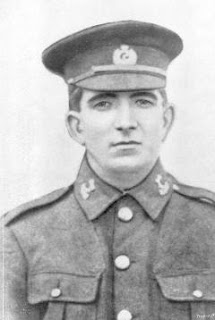 Before enlistment Edward George Russell was an engineer at the Government Workshops in Newmarket, Auckland.  He left Auckland on the 16 October 1914 with the Auckland Infantry Battalion most probably aboard the Waimana.  After surviving Gallipoli he left for France on 6 April 1916. He was wounded on either the 3/4 July 1916.  In his military records it states his wounds as a shrapnel wound. Edwards left leg was blown off and his right leg suffered a compound fracture.  He died of his wounds on the 5 July 1916 at 1:10am.  He is buried at the Bailleul Communal Cemetery Extension, Nord, France.  While I have been trawling through soldiers military records I have not come across much information on how a soldier died the description in Edward Russell's records was a sharp reminder of how brutal war.  It also served to remind me of the human suffering of these brave men, which we should never forget.
Posted by Helen Vail at 12:53 PM