Men from the Howick Memorial

Frederick Donovan Bradbury enlisted in the NZ Home Services.  Died from influenza on the 18 November  1918 at Motuihe Island in the Hauraki Gulf aged 30.  He is buried on the Island.   Motuihe Island was purchased by the New Zealand government in 1873 for use as a quarantine station. It was used as an internment camp during the 1914-1918 War for German prisoners of war from New Zealand and Samoa and was known as H.M.S. "Tamaki" in both World Wars. 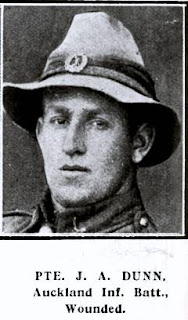 Private Joesph Alexander Dunn  embarked with the main body on the 16 October 1914,  He was wounded in Gallipoli.  He died in France on the 30 September 1916. 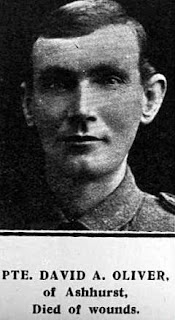 Private David Adam Oliver embarked on the 27 May 1916 on the Tofua from Wellington.  David Oliver was born and raised  in Pakuranga.  He died of his wounds on the 8 October 1916 aged 30.  Below is an excerpt from the Auckland Centotaph database. 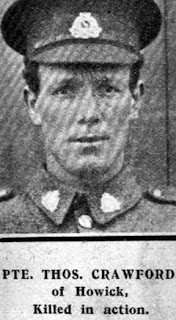 Private Thomas Crawford was a motor mechanic before he enlisted.  He embarked on the 7 December 1916 on the Port Lyttelton. He was killed in action at Ypres, Belgium on the 4 October 1917.  The Battle of Broodseinde took place on this day and is most likely where Private Crawford was killed.

Private Monty Ingram in his war diary gives a very vivid and first hand account of the battle.  His last words in his diary on his account of the 4 October 1917 are:
'Such was the day and night of October 4th 1917. Never shall they be forgotten.
Posted by Helen Vail at 12:40 PM