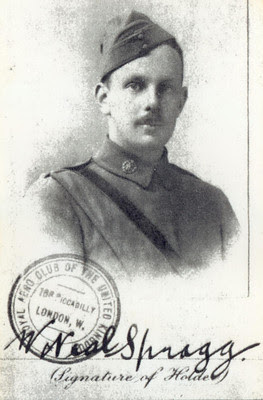 Wesley Spragg was born in 1894 the son of Wesley Spragg and Annie Dearnley.  Before enlistment Wesley was a Mechanical Engineer.  He enlisted in the Royal flying Corp and served in the Special Reserve School of Aerial Gunnery in the Middle East.  He was killed in action at Heliopolis Cairo on the 1 January 1918 aged 23.
He was his families only surviving son and in 1919 the family offered 760 acres to Auckland City Council Kaitarakihi Park is part of this park.
Posted by Helen Vail at 1:51 PM