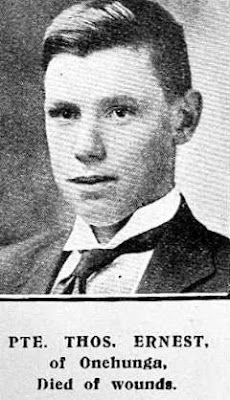 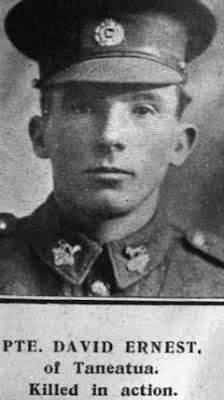 Thomas Ernest left New Zealand  with the 16th Reinforcements Auckland Infantry Battalion, A Company on the Aparima on the 19 August 1916 he was only 18 years old. On arrival in England he spent 3 weeks in Sling Camp before arriving in France on the 16 November 1916 where he was attached to a Lewis Gun team.  On the 7 June 1917 he was mortally wounded in the battle of Messines, he died the folowing day. Thomas was only 19.

Thomas was the youngest son of Thomas and Annie Ernest.  He attended Auckland Grammar School and was the scout master at St Aidan's Remuera.  On leaving school he was employed as a Bank Clerk at the National Bank in Onehunga.

His brother David Ernest was killed in action on the 3 April 1918 at the Somme.
Posted by Helen Vail at 12:38 PM