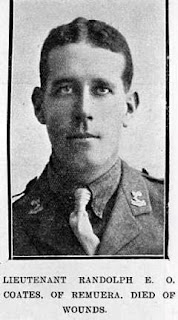 Randolph E. O. C. Coates and Eric A. Coates were the only two sons of Oswald and Valerie Coates who also had three daughters.  Both brothers had been born in Australia and had come to New Zealand at an early age in 1896 both boys were educated at Wanganui College.  On the 16 October 1914 they simultaneously embarked from New Zealand with the Main Body, Eric from Wellington and Randolph from Auckland.   I imagine this would have been a proud yet sad day for their family.

Both served at Gallipoli where Randolph was sent back to Egypt when he contracted influenza whilst embarking for Egypt he was injured by shrapnel.  Later his name appeared in dispatches mentioning his 'devotion to duty'.  He was also offered a commission in an English Regiment but turned it down preferring to stay with his fellow New Zealanders and shortly after he was offered a commission with the NZ Infantry.  He also passed the examinations for the Royal Flying Corp but was refused the transfer.  He ended up on the Western Front where he died of wounds received on the first day of the Flanders Campaign at the Battle of Messines on the 7th June 1917.j 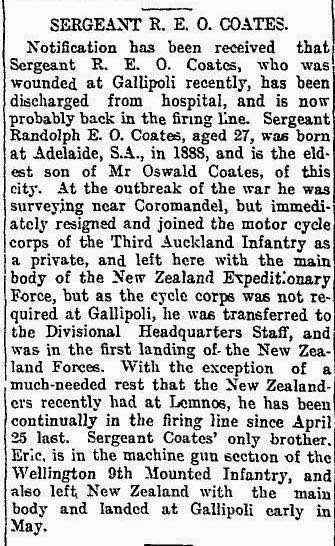 Eric never left the Middle East serving at Gallipoli, Sinai and then Palestine.  Despite surviving Eric died in New Zealand from Pneumonia on the 14 November 1918 only 3 days after the Armistice he was buried at Purewa Cemetery in Auckland and on his headstone his brother Randolph is remembered with him. 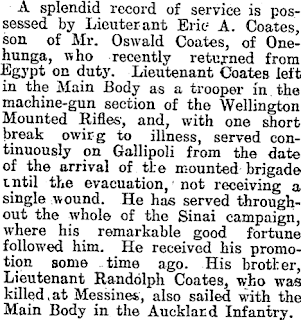 For Oswald and Valerie Coates it would have been small comfort to visit Purewa Cemetery in Auckland a place they could visit and remember their sons.  So many New Zealand families were never able to visited their sons final resting place far away on the other side of the world.   Memorials erected after the war became surrogate graves taking the place of an individual headstone.  The memorial was a place for those left behind to remember a loved one lost.