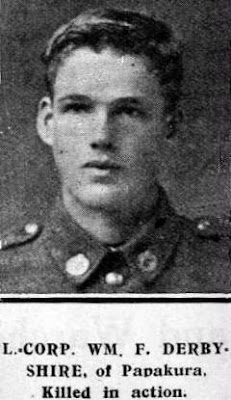 William Fred Derbyshire born in Papakura was the eldest son of Charles and Elizabeth Derbyshire.  Before enlisting he had been a labourer for C.H. Masonry of Pukekohe Hill.   He enlisted on 2 May 1916 and embarked with the 10th Reinforcements on 19 August 1916 and joined his unit in France on 14 December 1916.

In August 1917 William was hospitalised with Influenza but was back in the field by September 1917.  He went on leave to England from the 27 December 1917 - 12 January 1918.  A welcome break from the front seeing in the New Year in England rather than in the horrid conditions in France.

William rejoined his unit on 12 January 1918 and shortly after was sadly killed in action on the 28 March 1918 in France he was only  20 years old.  In his military record it states that he was buried where he fell about 1,000 yards North East of Colincamps.  His body presumably was never found or identified as he is remembered on the memorial at Grevillers.  A memorial to New Zealanders who fell during the fighting between March and August 1918 and whom have no known grave.

When I look at the picture of  William Derbyshire he looks far too young to fight in any war his youthful appearance reminds us that many of those men who gave their lives were really only boys.  In fact when I check William's birth date I found it was register in 1897 and if in fact he had been born in that year rather than June 1896 he would have been under age when he enlisted.
Posted by Helen Vail at 3:25 PM