On the Akaroa memorial one of the dead is a Sydney David Waghorn who died of his wounds in Palestine on the 19 April 1917 which by coincidence happened to be the same day his younger brother Percy Waghorn left NZ for the war.  I wonder how long it took for Percy to learn of his brothers death?

On further investigation of the Waghorn family it turned out that eight family members left Little Akaroa and enlisted for the war with seven returning safely.   I found a newspaper article which eludes to the eagerness and determination of the Waghorn's to enlist. 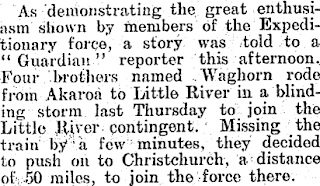 One of Arthur Guard Waghorn's great-grandchildren has contacted me with extra information.  They report that on the day Arthur was injured at Gallipoli his twin brother Ralph Noel Waghorn was bayoneted at Gallipoli.

Below is a list of the Waghorn's who enlisted from Little Akaroa: