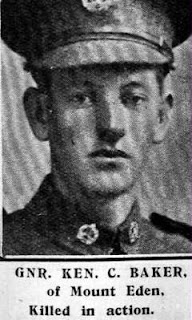 Kenneth Claude Baker embarked on 1 May 1916.  He served at Messines,  Belgium where he was killed in action on the 7 June 1917 the first day of the Battle of Messines.   Through the  National Archives NZ,  I was able  to access Kenneth Baker's Military records where there is a report on how he died, something I haven't come across very often on WW1 Military records.  The account was made by Private William Arthur Edge and reads as follows:

'It was on the night of the 7th June the first day of the Messines advance.  We were beyond Messines and some of our fellows were wounded in a shell hole there were no stretcher bearers about at the moment, so we went to help them and get them in ourselves.  Ken Baker was helping one of them.   He just stood up and as he did so he got sniped through the head and killed on the spot I was there and saw it happen.  We got in the wounded all night, Ken baker was buried behind the line.  But I have not seen the exact spot.'

As with many of the dead his body was never recovered and he is remembered on the New Zealand Messine Ridge Memorial.

He was the only son of William and Matilda Baker of Chester Street Mount Eden.