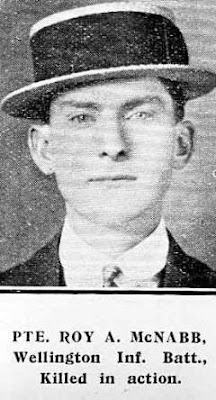 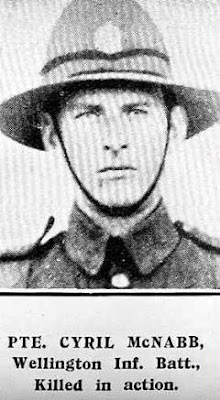 When I initially saw the above McNabb names inscribed on the Palmerston North Memorial, I assumed rightly that they would be brothers.  On further research I found that as a family five brothers in total enlisted to serve in World War One.

Tragically only two survived -  a great sacrifice by one family even in terms of World War One where family sacrifice was frequent.

Private Cyril Haare McNabb embarked with the Main Body with his brother Roy Alexander McNabb they most likely enlisted together as their military numbers are very close in sequence 10/819 and 10/830 respectively.   It seemed they were destined to follow each other in death as well, both sadly dying at Gallipoli - Roy on the 27 April 1915 aged 19 and Cyril on the 30 April 1915 aged 21.  Neither of them has a known grave and both are remembered on the Lone Pine Memorial at Gallipoli.

Losing two sons so soon after they embarked must surely have been devastating for their parents Edward and Phoebe McNabb.

A third son Vincent Irvine McNabb embarked on the 14 August 1915, his war also did not long he was killed in action on the Somme serving with the Otago Infantry Regiment on 12 July 1916 aged 28 years.  One cannot imagine how his parents felt losing a third son, especially with the knowledge that they had a further two sons still serving at the Front.

Louis and Owen McNabb enlisted together and embarked on 9 October 1915.  Both thankfully survived the war.

Only Roy and Cyril are mentioned on the Palmerston North Memorial.  There names most likely appear as a result of their brothers Louis and Owen who both enlisted at Palmerston North.

Below is a newspaper report which mentions the tragedy and sacrifice of the McNabb family whilst attempting to offer some sympathy in the knowledge that their sons did not die in vain.  Something as a parent myself would not necessarily have found a comfort.