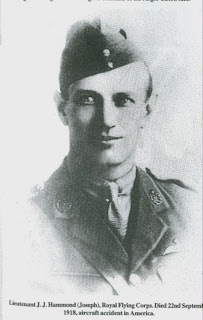 Captain Joseph Hammond was born in the Palmerston North area.  When I discovered him on the memorial I was amazed at the interesting and busy life he led - during its short duration.

Captain Hammond had flown in the World War One, becoming a test pilot.  He died on active duty in the United States when an aircraft he was flying on a war bonds promotional tour in 1918 crashed into a tree.  He was buried in the Crown Hill Cemetery in Indianapolis.

Rather than tell you in my inadequate words about his life I have entered a couple of links below which tell it so much better.  It is always a pleasure to come across such interesting stories on the memorials reminding me of how exciting and somewhat fragile were the lives of some who pioneered in areas which today we take for granted.

http://www.wanganuichronicle.co.nz/local/news/moving-memorial-to-the-bird-man/3949267/
Posted by Helen Vail at 11:15 AM