Thomas James Stanley and Herbert Andrew Stanley were the sons of the Mayor of Te Aroha - Thomas Stanley.   Both brothers embarked together on the 4 March 1916 with the 10th Reinforcements Auckland Infantry Battalion, A Company.

Herbert Stanley had fought in the Boer War and was obviously keen to do his part in WW1 despite being married and older than most of those enlisting he was born in 1883 making him 33 years old on embarkation.  According to his Cenotaph record he served in Egypt and France.  He died on 30 November 1918 in Te Aroha.  How he died I have yet to discover most likely from wounds sustained in the war or from disease.  He was obviously sent home before the end of the war and below is a mention of his death from the Ohinemuri Gazette: 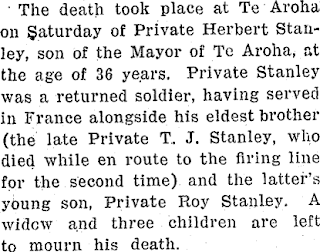 If anyone knows more about Herbert Stanley I would love to know.

Thomas James Stanley, Herbert's older brother was born in 1876 making him 40 years old on embarkation.  He was a widower with five children.  What makes Thomas Stanley's story interesting is that he was definitely one of the older men to enlist.  In France he was wounded from a high explosive shell in the foot, ankle and lower leg.  He had to have several toes amputated.  Thomas was eventually sent back to New Zealand being discharged as no longer fit for service from wounds received in the field and suffering from Shell Shock.  However remarkable after being found fit for service Thomas re-enlisted on 3 May 1918 in Wellington and was sent back overseas embarking on 10 July 1918 (He was now 42/43 years old).  Sadly Thomas never reach the Front he contracted Influenza and died at sea en route to England.  He was buried at sea.

While researching I found two letters written by Thomas printed in the Ohinemuri Gazette, I have reproduced them below.  In the first letter it clearly describes how Thomas felt about the war and how proud he was that he had made the decision to serve.  The letter gives a real insight into the mind of a soldier from World War One.


Thomas and Herbert were not the only members of the Stanley family to serve.  Thomas's eldest son Charles Roy Stanley enlisted and thankfully survived the war.
Posted by Helen Vail at 11:02 AM