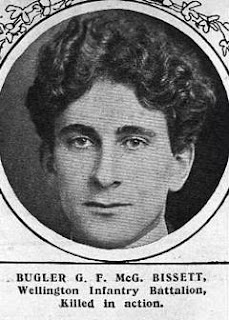 George Francis McGovern Bissett was the son of Adam and Alice Bissett.  He enlisted in Feilding and embarked with the Main Body on 16 October 1914 his rank was that of Bugler.  He was killed in action at the Battle of the Landing on Russell's Top (Walker's Ridge) on 27 April 1915.  He was 20 years old.   I found the mention below of Bissett in the Auckland Star in 1917 which caught my interest:

After 2 ½ years, Mr & Mrs A BISSETT, late of Feilding but now of Wanganui, have received the bugle used by their son George F BISSETT before he was killed on Gallipoli. The bugler boy engraved on the instrument the name of each camping place and the bugle has three bullet holes in it.

On further research I discovered the bugle is now on display at the NZ National Army Museum.  The link below is to an article about the bugle written by one of the museum's curators.
http://www.armymuseum.co.nz/kiwis-at-war/did-you-know.html#bugle

Bissett was also mentioned in Colonel William Malone's, Commander of the Wellington Regiment, diary. Below is the excerpt:

"I went on a little scout by myself, on our left. I took a rifle and slithered into the scrub. Found several dead Turks about, poor devils - been there since 25 April. Not pleasant to look at ... Unfortunately we can't bury lots of our men, poor chaps. We can see them here and there, but it is almost certain death to go out to them. There are two I would specially like to bury. Lieutenant Wilson and a bugler lad -
Bissett from Hawera. He lies with his bugle on his back face downwards, shot in his tracks."
(Taken from the NZ History website)

When an Armistice was called to bury the dead on 25 May 1915 Colonel Malone got the opportunity he needed to fulfill his wish.

I wonder how his parents felt receiving their son's bugle. Was it a comfort or a reminder of their awful loss?  In the death notice that they put in the newspaper they ended it with the words  "Every inch a soldier"  which leads me to think they were very proud of their son's sacrifice and most probably found the bugle's return a comfort.
Posted by Helen Vail at 7:00 PM