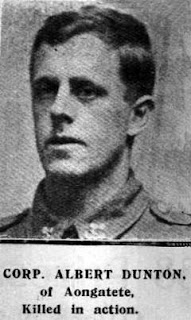 Albert Dunton of Aongatete embarked with the 6th Reinforcements as part of the Auckland Infantry Battalion on 14 August 1915.  Albert served at Gallipoli before ending up on the Western Front.  He was killed in action on the first day of the Battle of Messines on 7 June 1917.

Albert had two brothers who also served in the war firstly James W. Dunton embarking shortly after his brother's death on 26 July 1917 and  Edward O. Dunton embarking on 10 July 1918.  Both survived the war.  I can't imagine how difficult it would have been for their parents watching them go off to war after losing their first son.
Posted by Helen Vail at 8:03 PM