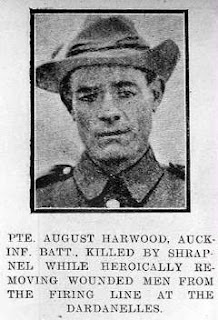 August Harwood was born in Little River, Nr Christchurch in 1889.  In 1914 he found himself working for John King as a labourer in Te Aroha.   He enlisted in Auckland on the 28 August 1914 and embarked on the 16 October 1914 with the Main Body from Auckland as part of the Auckland Infantry Battalion.

August was killed in action on the 5 May 1915 he was by now attached to the Ambulance Corps as a Stretcher Bearer.  In much of the reading I have done regarding World War One the stretcher bearers are highly praised for their bravery and commitment.  August by all reports was no different.

The report below is taken from the Auckland Weekly News, 22 July 1915

The men speak with affectionate regret and no little pride of Pte August HARWOOD, Ambulance Corps. He worked like a hero said Cpl SQUIRE of Mt Eden. No thought of personal danger ever deterred him. He was removing the wounded to safety day and night and mostly under fire. There was one very bad place on the right flank which we called ‘the death trap’, this was a long gully exposed fully to the enemy fire and containing practically no cover. Harwood had just taken a wounded man down this gully when in a part of the [area[ commanded by the Turks’ maxims, he was hit by a bullet which penetrated his back and pierced his heart. He died within a few moments.
Posted by Helen Vail at 11:02 AM