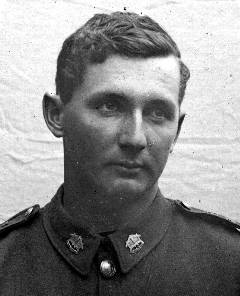 Private Otto Diggelmann son of Albert and Anna Diggelmann was a farmer he embarked on the Arawa on 13 October 1917.  He died on 4 November 1918 in England after receiving a wound to the head and then contracting meningitis, he was 22 years old.  He is buried at the Aldershot Miltary Cemetery in the South of England. 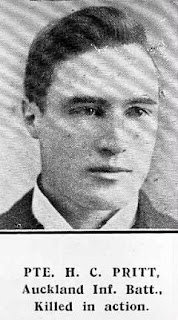 Henry Capel Pritt was the son of Lonsdale and Mary Pritt.  He embarked on the 13 June 1915 with the 5th Reinforcements as part of the Auckland Infantry Battalion.  His war like many was short,  being killed in action at Gallipoli on 8 August 1915 he is remembered at the Chunuk Bair (NZ) Memorial. 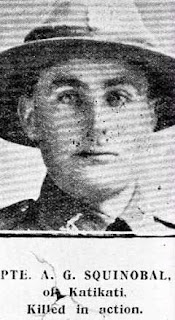 Albert George Squinobal was the son of Joseph and Eliza Squinobal and a Farmer from Katikati.  He embarked on the 8 January 1916 as part of the 9th Reinforcements Auckland Mounted Rifles, A Squadron.   He was killed in action at the Somme on 21 November 1916 and is remembered at Caterpillar Valley (NZ) Memorial.  Albert was 26 years old.
Posted by Helen Vail at 12:40 PM