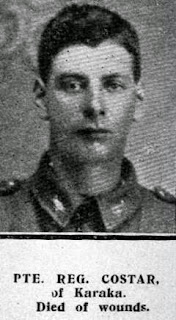 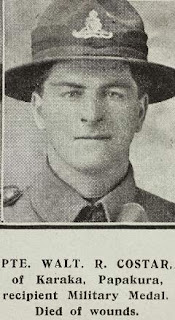 The poem above was inserted in the New Zealand Herald on 9 December 1918 in memory of the Costar brothers by their family on the one year anniversary of the death of Walter Costar.

Reginald (known as Reg) and Walter (known as Wally or Walt) Costar were the sons of Matoaka and Sarah Costar farmers in Karaka.  Their father arrived in New Zealand in 1865, he was born on the journey from London aboard the Matoaka somewhere in the Atlantic hence his parents named him Matoaka Atlantic Costar.

Walter embarked with the 9th Reinforcements on 8 January 1916 before enlisting he had been employed as an electrician with A & T Burt of Auckland. He was first wounded on 19 June 1917 but soon recovered and was back in the field before the end of June 1917.  He was awarded the Military Medal for 'Bravery in the field'.  I found an account in the New Zealand Herald dated 12 February 1918 which stated that:

On 5 December 1918 Walter was wounded a second time with fatal consequences.  He died of his wounds on 9 December 1917 aged 24 years and was buried at Lijssenthoek Military Cemetery, Belgium.

His brother Reginald embarked with the 26th Reinforcements on 12 June 1917 when he disembarked at Devonport, England on 16 August 1917 he was immediately hospitalised with Measles.  Once recovered he was sent to Codford camp and then to Sling Camp where he would have received the news of his brothers death.  He finally embarked for France in December 1917 attached to the Auckland Infantry Battalion, however by February he was back in hospital with Influenza. Once recovered he rejoined the Auckland Regiment in March 1918.

On 13 September 1918 Reginald was wounded in the thigh and admitted to the advanced dressing station of the 3rd New Zealand field ambulance.  He died of his wounds the same day aged 22 and is buried at Serre Road Cemetery No 2, Somme, France.

The family continued to remember the boys in the New Zealand Herald on the anniversary of their deaths for many years to come including through the second world war.
Posted by Helen Vail at 12:32 PM