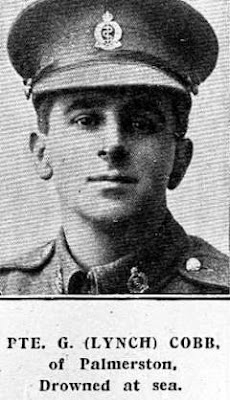 Private Cobb served on the Hospital Ship Marama.  He embarked twice from New Zealand aboard the Marama on the 10 November 1916 and 22 March 1917.  While serving on the ship he was lost overboard during a storm on the 27 May 1917.  Below is a report from the Poverty Bay Times (taken from Papers Past) of the drowning:

The article is headed "Wash Overboard, Thrilling Experiences" I can not imagine the parents of Private Cobb would have thought that a report of their son's drowning was a thrilling experience.
Posted by Helen Vail at 4:45 PM