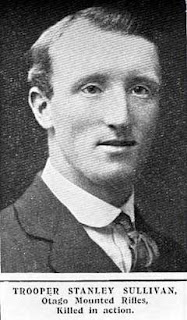 Trooper Stanley Sullivan was one of four sons of John and Katherine Sullivan of Methven who served in World War One. Stanley with his brother Edward enlisted on the 20 August 1914 and embarked from Port Chalmers with the Otago Mounted Rifles on the 16 October 1914, at the time of his enlistment they had both been working as labourers in Mataura in Southland.  Their brother Francis James Sullivan (known as Frank) enlisted on the 10 March 1915 and embarked on the 17 April 1915 from Wellington with the NZ Field Engineers.  Frank had been a clerk at the Railways Traffic Office in Wellington.   All three served at Gallipoli.  Stanley was killed in action on the 25 July 1915 at No.2 Outpost, Walkers Ridge.  In a letter from Lance Corporal Knight he retells how he met Edward Sullivan in London while he was convalescing  who reported how he was by his brother's side when he was killed at Gallipoli.

Frank left the peninsula for France on the 2 April 1916, he was promoted to 2nd Corporal on the 19 April 1916.  Just over a month after returning from leave in the UK, Frank was killed in action on the 26 November 1917 at Ypres.  He is buried at the New Irish Farm Cemetery in Belgium.  Below in the notification of his death taken from the newspaper which also gives us an insight into the whereabouts and condition of the other two brothers.  As yet there is no access to the remaining two brothers military records and I would love to find out how they progressed after the war. 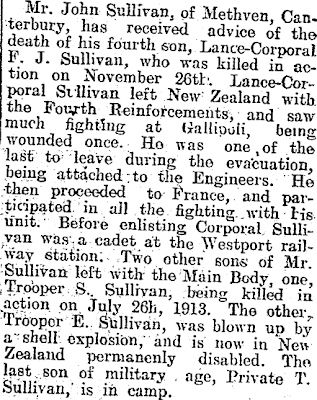