The men of the Windwhistle - Glenroy Memorial 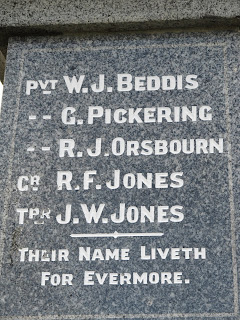 Private William James Beddis born in Glenroy was the son of Mr. and Mrs. John W. Beddis.  Before enlistment he worked as a labourer and embarked on 7 October 1915 with the 7th Reinforcements, Canterbury Infantry Battalion.  Private Beddis was wounded on the 21 September 1916 receiving gunshot wounds to the left leg, thigh and shoulder.  He died of his wounds on the 30 September 1916 he is buried at the Dernancourt Communal Cemetery in Northern France.

Private George Pickering born in Hororata was the son of William and Jennet Pickering. Private Pickering also a widower and at the time of enlistment had 3 children under the age of 16 who according to his military records where provided for.   He was an engine driver for Jarman Brothers of Greendale. (Two of Thomas Elworthy Jarman's sons were also killed in action during WW1 Frank Jarman at Gallipoli and Harry Jarman at Bapaume, France)  Private Pickering embarked on the 13 February 1917 aboard the Mokoia and was killed in action on the 12 October 1917 at Ypres he is remembered on the Tyne Cot Memorial in Belgium.

Private Robert John Orsbourn enlisted at Glenroy.  Private Orsbourn never made it to the Front he died of disease on the 30 November 1918 most likely of influenza during the November 1918 influenza epidemic. He is buried at Featherson.

Gunner Richard Francis Jones the son of Richard and Rebecca Jones, of Glenroy was farm hand before enlistment and embarked on the 8 January 1916.  He died of his wounds on the 15 April 1917 in France and is buried in the Trois-Arbres cemetery in France.

Trooper John William Jones  was the older brother of Richard Francis Jones he too was a farm hand before he enlisted.  Trooper Jones embarked on the 19 April 1917 aboard the Moeraki headed for Egypt.  Trooper J W Jones was killed in action on 14 November 1917 at Ayun Kara in then Palestine.

The NZMR website has a detailed and extensive report including first hand accounts of the action at Ayun Kara.  It also has a photo of the original memorial (which no longer exists today) to those who fell.      http://www.nzmr.org/ayunkara.htm
Posted by Helen Vail at 11:51 AM