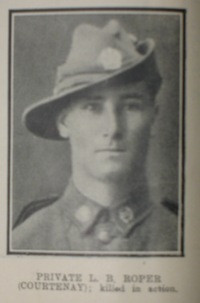 Private Leonard Roper was born on 12 July 1895 in Courtenay, Canterbury the son of Frederick and Evaline Roper. Before he enlisted on the 18 October 1915 he worked as a Blacksmith at Kirwee, Canterbury.  Embarking on the 4 March 1916 from Wellington as part of the 10th Reinforcements Canterbury Infantry Battalion, C Company, he eventually joined the 2nd Battalion of the Canterbury Infantry Regiment at Armentieres, France.  He was wounded in action on the 15 September 1916 suffering shell shock but soon rejoined his unit on the 24 September 1916.  Days later Private Roper was killed in action on the 1 October 1916.  His war like so many was tragically short.

When looking at Private Roper's military record I found a statement by a Sergeant Glasson recalling how he was killed.  It stated that the Germans had attempted to bomb them and as soon as they began Private Roper had gathered up a box of bombs and gone over the parapet and started throwing the bombs at the Germans.  The next morning they found him lying dead and buried him at the trench about 2 miles to the left of Flers.  Today Private Roper is laid to rest in the Caterpillar Cemetery, Longueval, France.

I wonder how many lives Private Roper saved as a result of his actions that day?  John Morrison Glasson the sergeant who made the report was maybe one as he did survived the war.
Posted by Helen Vail at 2:38 PM