Robert Goodwin was a shearer and married with two young children at the time when his name was pulled out from the 11th Ballot to enlist for duty.  On his military records his enlistment date is 17 August 1917, however he never reported for duty until the 3rd June 1918.  Robert Goodwin, like many agricultural workers appealed for an extension to his date for enlistment.

Many farmers and those associated with farming like Robert Goodwin (and his employer) felt their role at home on the farm was essential (Robert Goodwin had 3 brothers already serving at the front when he was called up).  The concern in the farming community was that farms would be left with no one to run them and production of food would be severely affected.

This concern was put to Prime Minister William Massey in April 1916 when a deputation from the chief grain growing districts went to Wellington in what was to become known as the 'last man on the farm deputation'.  The deputation ask for consideration from the Regional Military Service Boards (who heard the appeals of those men called up to serve by Ballot who wanted to be exempt of wanted an extension) for men who were in many cases the last and often the most able men left on farms and should be exempt from service or at least given extensions to complete harvesting etc.   An uncle of  Robert Goodwin's Walter Goodwin a Councillor in the Mount Hutt district was part of the deputation.

Private Robert Goodwin as mentioned departed for Camp on the 3 June 1918.  On the day when World War One at last came to an end on the 11 November 1918 Private Goodwin died from Pneumonia. 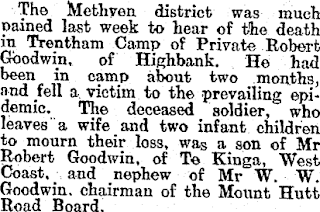 Of Robert Goodwin's three brothers - Cornelius Lee Goodwin was killed in action on the 18 August 1918 at Bapaume, Ernest Arthur Goodwin and Walter James Goodwin came back safely (as far as I can ascerrtain).
Posted by Helen Vail at 4:54 PM