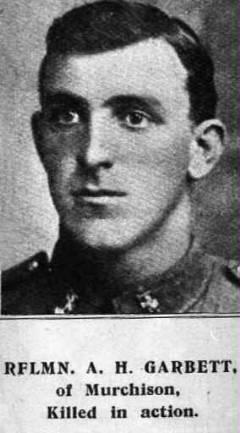 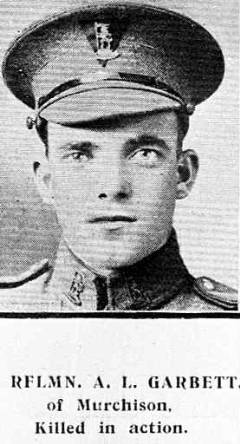 Alfred Louis, William Richard, Amos Henry and Henry Ernest Garbett were the sons of the late Henry Garbett and Eleanor Jackson (formerly Garbett) all were born in Lyell, Westport.  Their father had died in 1905 and their mother remarried and moved to Murchison.

Once in France Alfred and Henry found themselves at the Somme on 15 September 1916 where during the battle Alfred was one of the 602 New Zealand soldiers sadly killed in action that day (1) and Henry was wounded receiving a shrapnel wound to the left forearm.  In the meantime Amos and William were making their way with the 15th Reinforcements towards England.   I wonder how and when they heard the terrible news of their two brothers?  Once they had disembarked in England I hope they were able to pay a visit to their brother Henry who had been admitted to Brockenhurst Hospital.

Together with the profound grief Amos and William felt they must have been filled with the mixed emotions of revenge and trepidation as they too headed for the front.

On 7 June 1917 at Messines Amos was killed in action a double blow for the Garbett family.
For the rest of the war Henry Garbett was plagued with 'debility' which today we might call Chronic Fatigue Syndrome or even Post Traumatic Stress Syndrome.  William Garbett was also plagued with ill health including diarrhea and scabies which no doubt was a result of the appalling conditions soldiers had to live in.   They returned to New Zealand without their beloved brothers whom were never forgotten and I found many 'In Memoriam' entries on Papers Past for Alfred and Amos including the entry below inserted by their sister, which I feel says it all:

Often do my sad thoughts wander,
To a grave so far away
Where they laid my loving brother,
Just a year ago to-day.

He sleeps beside his comrades,
In a shallow grave, unknown,
But his name is written in letters of love
In the hearts that he left at home.