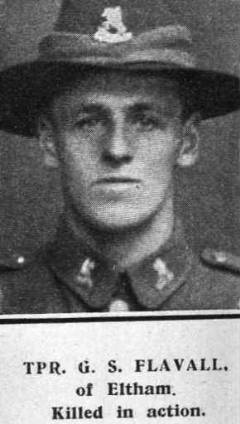 While searching through Papers Past for information I often come across accounts of the fond farewells given to soldiers by their local communities before they finally embarked for war.

Those close to the soldier/s departing must have been filled with a mixture of emotions whilst trying to enjoy the dancing and singing which was present at such send-offs.  Local communities were clearly proud of their contributions to the war effort and of those leaving to do their duty for "King and Country".   In appreciation gifts were presented to the departing soldier to mark the occasion, some useful and some of little use at all such as silver grooming sets (a must have for a rat invested, muddy trench at the front) but as the old adage goes "it is the thought that counts".

At the residence of Mr S Death Trooper Gilbert Sutherland Flavall of Eltham was farewelled and presented with an "illuminated wrist watch"  by Mr Babbage who " ...hoped than when he learnt the time in the trenches from its face it would serve to remind him of the anxious faces...waiting for his return".  Mr Babbage's son Rifleman Frederick Babbage would soon be presented with an identical watch before his departure a few months later.

Trooper Sutherland embarked with the Wellington Mounted Rifles on 7 June 1917 headed for Palestine.  He was sadly killed in action on 1 April 1918 during an ambush by Circassians villagers at Ain es Sir, Jordan.   His body was never recovered and he is remembered on the Jerusalem Memorial, Jerusalem War Cemetery.

Rifleman (Rfm) Babbage son of Frederick and Mary Babbage embarked on 16 November 1917 with the New Zealand Rifle Brigade.  Days before the relief of Le Quesnoy, Rfm Babbage volunteered on for a raid on two enemy posts at 2:00am on 30 October 1918 during the raid he was wounded and he died later in the day he was 22 years old and is buried at Solesmes Communal Cemetery, Nord, France.  The Babbage Family received letters from his commanding officer Lieutenant Gordon McGhie and Private John Rankin which I have reproduced below.