Lionel Grimstone was born in Alexandra the son of  Leonard Burrows and Alice M. Grimstone.  His father had been the branch manager of the Bank of New Zealand (BNZ) in Alexandra since about 1893.   Lionel had been one of two sons until his brother Reginald was tragically killed as a result of a landslide in a gravel pit when a he was only 10 years old in 1905.   Shortly after the accident the family moved to Paeroa where Leonard Grimstone was appointed branch manager of the BNZ.  After a further move to Waitara the family finally settled in Eltham, South Taranaki in 1912.

Eltham is where a 19 year old Lionel Grimstone would be one of the first in the town to enlist.  He embarked with the Main Body from Wellington on 16 October 1914 as part of the Wellington Mounted Rifles.  On his way to the Dardanelles, Lionel was witness to an unfortunate accident which as a result left one man dead. 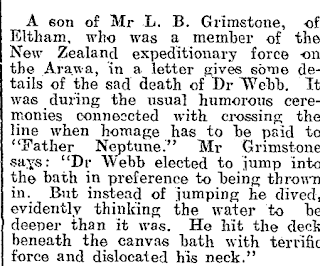 Whilst Dr. Webb's death was the result of 'maritime prank'  we should not forget that he had volunteered to do his duty just as those who accompanied aboard the ship had done and who later died on the battlefield.

In July 1915 Lionel contracted Enteric Fever and was transferred to hospital in Malta.  On his recovery he applied for a commission which he received, eventually holding the rank of Lieutenant.  In October 1918 Lionel Grimstone was part of the New Zealand Field Artillery and on 8 October 1918 he was killed in action at Le Cateau in France almost four years to the day that he had embarked from New Zealand to fight in the Great War.

For his family back home in NZ the news like for many would have been devastating.  During the war years Lionel's father & mother had worked tirelessly in Eltham raising money for the Patriotic Fund.  Leonard Grimstone was the official welcomer to a group of invalided soldiers who were returning to Eltham on 10 October 1918, only two days after the death of his son.  On welcoming these soldiers he must surely have thought of his own son and wondered how long it would be before he welcomed his return to NZ.   I suspect at the time he had not yet to heard of his son's death. 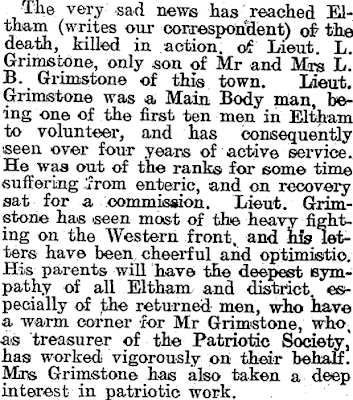