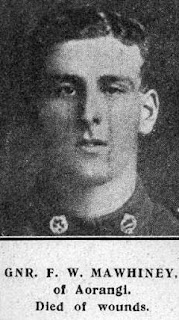 Gunner Mawhiney was born in Napier on the 14 December 1891.  At enlistment he was employed as a motor mechanic by J Tyler in Martinborough.   He embarked on 19 January 1917 from Wellington on the Ulimaroa as part of the 21st Reinforcements Specialists Company, Machine-Gun Section.

Mawhiney died of his wounds on 13 October 1917 from a gun shot wound to the neck received on the 12 October 1917.  The wound was most likely received at the New Zealand attack on Bellevue Spur, part of the first Battle of Passchendaele.  The battle was an ill fated one which incurred heavy losses for the New Zealanders with the number of reported killed varying from 640 to 845.
http://www.nzhistory.net.nz/war/new-zealanders-in-belgium/passchendaele

On Mawhiney's military record there is a small account by the Chaplain of the 2nd Canadian Casualty Clearing station which reports that 'despite every care and attention he died at 9:30 pm ...  He was practically unconsciousness and therefore suffered little pain.'  I hope his family knew this detail it may have given them a small comfort.

Below is a  remembrance notice from the Auckland Weekly News dated 10 October 1918, which I found extremely moving:

Frederick William Mawhiney, 21st Specialists, died of wounds, France 13 October 1917.
[Parents, sisters, brothers]  [AWN 10.10.1918]
He left his home, the flower of youth; He seemed so strong and brave
We little thought how soon he would be laid in a hero’s grave.
But the saddest blow is yet to come, when the warriors all return,
And we look for our darling boy who never will return.
Posted by Helen Vail at 12:19 PM