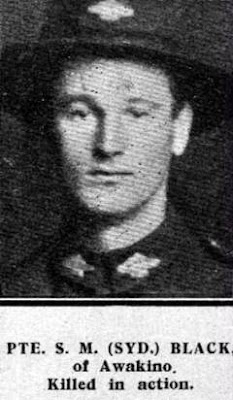 Sydney Morrison Black was a farmer and the son of Alfred and Elizabeth Black he embarked with the 15th Reinforcements on 26 July 1916 as part of the Wellington Infantry Regiment.  His cousin Edward Leslie Black also a farmer embarked with him as part of the Wellington Infantry Regiment.  Edward was the son of William and Mary Black.  Sydney Black was sadly killed in action aged 26, at Bapaume on 26 August 1918 at the same battle on the previous day his cousin Edward won a Military Medal for gallantry.   Citation below:

For conspicuous gallantry and devotion to duty.  On 25 August 1918 during operation near Grevillers while acting as a Battalion runner, Private Black carried on three different occasions important message to the forward area through a very heavy barrage of shell and machines gun fire.  He set a very high standard of courage and by his devotion to duty through a most critical period helped in a great measure the success of our operations.    Citation taken from Wayne Macdonalds book Awar

Edward Leslie Black returned to New Zealand at the end of the war and died in 1965 aged 81 years. However, the Black family contribution did not stop there. 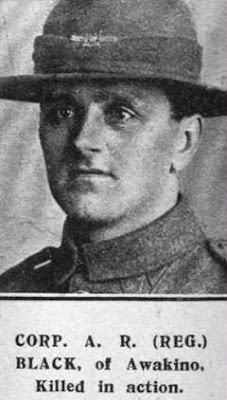 Alfred Reginald Black brother of Edward and son of William Black enlisted in December 1915 and embarked on 1 April 1916 with the 11th Reinforcements as part of the Wellington Infantry Battalion.   Alfred Black was promoted to the rank of Corporal on 10 February 1918 and then enjoyed some leave in the United Kingdom before returning to duty on 15 March 1918. Two weeks later on 30 March 1918 at  the Somme he was killed in action.

A further member of the Black family enlisted that of Ronald Clifford Black son of  William Black and brother to Alfred and Edward.  Ronald embarked on 27 May 1916 and served with the New Zealand Rifle Brigade.  Despite being wounded in 1918 Ronald survived the war and returned to New Zealand dying in 1971 aged 74 years.

The Black Family's contribution to World War One was like many families of that time a great one.  It was also full of proud moments mixed with overwhelming grief at those who were lost and joy for those who returned.
Posted by Helen Vail at 1:35 PM