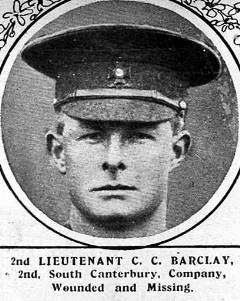 2nd Lieutenant (Lieut.) Clifford Barclay was not originally from Te Kuiti he was a Canterbury man and the son of Lieutenant Colonel Herbert Barclay.  I could find no direct link to the Barclay family and Te Kuiti except that maybe Barclay's  job as a Stock Agent for Guiness Le Cren took him to Te Kuiti on many occasions where he was thought well enough of to be mentioned on their memorial.

Clifford Barclay enlisted in Timaru on the 13 August 1914 he was 21 years old.  He embarked with the Main Body as part of the Canterbury Infantry Battalion on 16 October 1914.   On the 25 April 1915 he was reported missing and later pronounced killed in action by a Board of Enquiry.

In a twist of fate the 25 April 1915 would have been Clifford Barclay's  22nd birthday.  I have no doubt his family back in New Zealand would have been thinking fondly of him on that day.  It is tragic to think that a day of family celebration should become a sad day of commemoration for the Barclay family.

As a side note Lieut. Colonel Herbert Barclay (Clifford Barclay's father) also served in World War One (I wonder how many fathers and sons served in this war?).  Lieut. Colonel Barclay was on extended leave when war broke out overseas and he ended up serving at the Russian Field Hospital in Petrograd until January 1915.  (There is a small but interesting display about the hospital in the War Memorial Museum in Auckland in the Armoury department)  I also found an interesting report made by Lieut. Colonel Barclay printed in the Evening Post about the Hospital. See link below:
http://paperspast.natlib.govt.nz/cgi-bin/paperspast?a=d&cl=search&d=EP19150217.2.139&srpos=119&e=-08-1914--12-1915--10--111--on--2barclay--

Lieut. Colonel Barclay served out the rest of the war with the Royal Army Medical Corp in France.  Unlike his son Clifford he survived the war.
Posted by Helen Vail at 3:52 PM