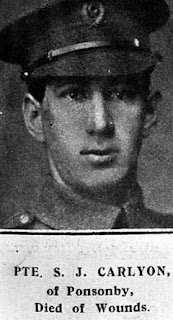 Private Samuel Carlyon was 18 years of age when embarked with the 5th Reinforcements on the 13 June 1916 headed for Gallipoli.  After serving in Gallipoli he went to France where he died of his wounds on 11 July 1916.

Samuel Carlyon was the son of Samuel and Mary Carlyon, he was born in the Coromandel but moved to Auckland and went to Ponsonby School.  On leaving school he trained as a blacksmith in Gisborne.  When he enlisted he was working as a blacksmith in Waiuku.

Samuel and Mary Carlyon lost a second son as a result of the war.   William Edward Carlyon died of disease while on training in New Zealand with the NZEF on the 23 November 1918 and is buried at the Featherston Cemetery.  He was married and worked at the Waihi Gold mine in the Bay of Plenty.
Posted by Helen Vail at 10:28 PM