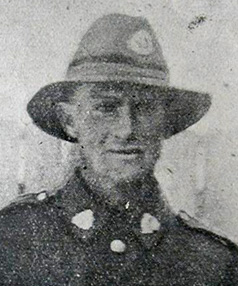 Private Richard Cook from Colac Bay, Southland was born on the 9 June 1892.  Before enlistment he was a sawyer for W. Smith & Co., Colac Bay.  He embarked on the 30 December 1916 on the 'Athenic' from Wellington as part of the 20th Reinforcements and served in the Otago Infantry Battalion, D Company.  He was wounded on the 4 October 1917 with gunshot wounds to the left hip and right shoulder in the battle for Paschendaele. He later died of his wounds at the 7th Canadian Hospital on the 8 October 1917.  His Bible was found on the Messines Ridge (where the NZ Division had fought in mid 1917) by an English soldier Herbert Hodgson.  Herbert had fallen into a shell hole stretched out his arm and felt something in the mud and found the Bible.  Herbert kept the bible not knowing who it belonged to as it contained no name. However an army number was written in the side of the Bible. Using the internet Herbert's family traced the Bible back to New Zealand and eventually identified the owner, Richard Cook, from his army number 34816. This has enabled the Bible to be returned to the Cook Family.  Today the Bible was presented to the Army Museum at Waiouru to be used as part of a exhibition being held towards the end of the year.

This is an incredible find by Herbert Hodgson whose memoirs were published last yea and in which he outlines his discovery.
http://www.stuff.co.nz/national/3825688/Family-of-battlefield-bible-owner-found
Posted by Helen Vail at 7:24 PM