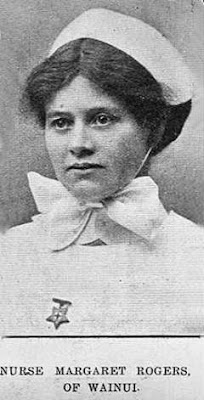 Margaret Rogers was the daughter of Thomas Rogers of Akaroa.  She was a District Nurse in Christchurch.  She was one of the first 50 New Zealand Nurses who embarked from Wellington aboard the Maheno on the 10 July 1915 (Hospital Ship No 1) headed for war.
Sadly her contribution to the war effort was short lived.  Margaret was aboard the doomed troopship 'Marquette' which was torpedoed in the Aegean Sea near Salonika on the 23 October 1915. A total of 741 people were on board including 36 New Zealand nurses, 10 of whom died including Nurse Margaret Rogers.
After the Marquette sank the survivors waited 7 - 8 hours before being rescued clinging to the wreckage.  Of the 10 nurses who drowned only two bodies were recovered one of whom was Margaret Rogers. Her body was found in a lifeboat and was identified by her gold watch which had her name engraved on it.  In one account it states the lifeboat had washed ashore with the bodies of two nurses and four men aboard and it was rumoured that they had been shot. http://www.nzetc.org/tm/scholarly/tei-MacNurs-t1-body-d38.html
In memory of the nurses who lost their lives on the Marquette a memorial chapel in their memory was erected at Christchurch Hospital.  The idea of the chapel was originally suggested by Matron Mabel Thurston in 1914 and money was raised from the community for the building.  The chapel was finally opened on the 15 March 1926. http://www.nzma.org.nz/journal/119-1244/2292
Margaret Rogers story reminds us that it was not only sons that perished in the war but daughters as well.  In all 550 nurses served with the New Zealand Expeditionary Force, and many others enlisted in the United Kingdom.
Posted by Helen Vail at 10:33 AM