The Matamata war memorial is very well kept I visited it on a trip back from Rotorua. There are three sets of brothers on the memorial a reminder that families often lost more than one son. In the case of the Sutherland brothers they died a month apart the grief of there parents is unimaginable. 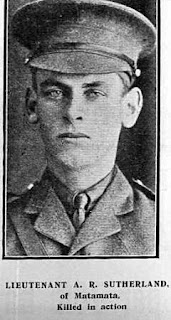 Alexander Rueben Sutherland was an engineer before enlistment. He was a 2nd Lieutenant.  He embarked for France on the 8th January 1916 and was killed on the 25 September 1916 in the Somme.  He is buried Caterpillar Valley Cemetery, Longueval,which I visited with my family a few years ago.  Visiting  one of the War Cemetery's in France or Belgium gives you a clearer picture into the sheer scale of the loss of live during WW1.

Hugh Charles Sutherland (Alexander's brother) was a farmer and embarked for Egypt on the 14 August 1915 he was killed in action on the 9th August 1916 in Egypt.  Two weeks before his brother.  I wonder if Alexander knew his brother had died before he himself was killed.
Posted by Helen Vail at 4:09 PM