Private Arthur Shannon was the son of Frank Shannon the Rodney County Engineer.  Private Shannon embarked with the 12th Reinforcements on the 6 May 1916 attached to the Wellington Infantry Battalion.  He was killed in action on the 24 August 1918 at Baupaume while serving with the Auckland Infantry Battalion aged 24.  Below is a letter printed in the Rodney and Otamatea Times, Waitemata and Kaipara Gazette on the 18 December 1918.

Receiving a letter such as the above would have been of great comfort to his family but one 2nd Lieut. Lang would no doubt have found difficult to write.  I wonder if the letter still exists today?  According to the letter Private Shannon's body was buried '500 yards west of the village'  however it is unfortunate that his body was never recovered as Private Shannon is remembered on the Grevillers (NZ) Memorial. The Memorial commemorates almost 450 officers and men of the New Zealand Division who died in the defensive fighting in the area from March to August 1918, and in the Advance to Victory between 8 August and 11 November 1918, and who have no known grave.(from the CWGC website). 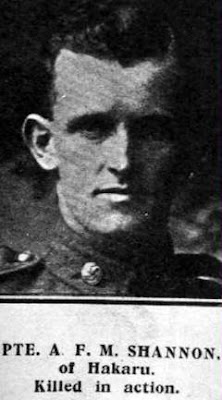