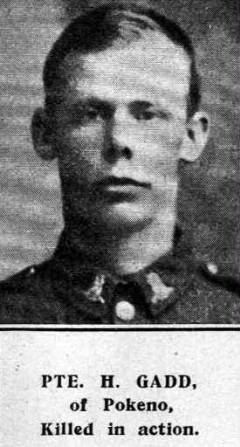 Private Herbert Gadd was born in Birmingham, England on 4 June 1896, he was the son of Herbert and Annie Gadd who later moved to New Zealand.  Before he enlisted Private Gadd was a timber worker for the United Timber Company in Mercer.  If his birthdate is correct, shortly after turning 20 years old he enlisted for service on 24 July 1916.  Private Gadd embarked with the New Zealand Rifle Brigade, 13th Reinforcements 1st Battalion, E Company on 15 November 1916, aboard the Manganui leaving from Wellington bound for Plymouth.
Once in France he joined the 1st Auckland Regiment in April 1917.  He most likely served with the Auckland Regiment at Ypres.   Private Gadd was granted leave to the UK on 28 February 1918, rejoining his unit on 19 March 1918.  Just over a week later after returning from leave he was killed in action on 27 March 1918 at the Somme.
In his military records there is an unofficial report by Private Bertram Ashley that Private Gadd was buried in a shell hole at Mailly Maillet.  Private Gadd is remembered at Euston Road Cemetery, Colincamps, 170 of the burials at Euston Road are unidentified but there are special memorials to 32 casualties known or believed to be buried among them, Private Gadd is one of those.
Posted by Helen Vail at 12:16 PM