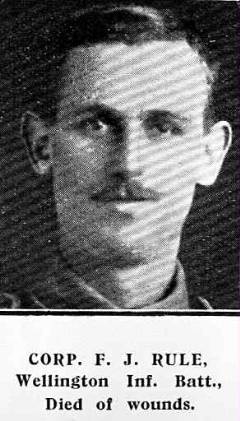 Frank Jennings Rule born in Australia was a school teacher at Hunterville School before enlisting on 15 August 1914.   He embarked with the Main Body attached to the Wellington Infantry Battalion.  He was promoted to Corporal and then Lance Sergeant on 7 May 1915, he most likely would have gained a commission had he not been severely wounded on 8 May 1915 receiving a gun shot wound to face.  He was eventually transferred to the 5th Indian hospital at Alexandria, where he died of his wounds on 26 May 1915 aged 26 years he is buried in the Alexandria (Chatby) Military and War Memorial Cemetery, Egypt.
For the Rule family back in New Zealand the news of Frank's death would have been devastating but sadly the family would suffer again when a second son Lieutenant William Bramwell Rule (also a school teacher) was killed in action at Passchendaele on 12 October 1917 aged 25 years.  William's body was never identified and his is remembered with so many others on the Tyne Cot Memorial, Tyne Cot Cemetery, Zonnebeke, West-Vlaanderen, Belgium.