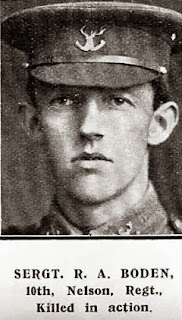 
Sergeant Richard Arthur Boden known as 'Dick' was born in Woodville, Manawatu the son of William Francis Boden of Wellington.

Prior to enlisting Sgt. Boden was employed as a Law Clerk for the firm McCallum, Mills & Spence in Blenheim.  By all accounts Sgt. Boden was a keen sportsman and a very active member of the territorials so it was of no surprise that he would enlist early.  He left Blenheim in command of the second contingent of Marlborough mounted men on 14 August 1914 riding on a horse that had been presented to him by the Marlborough High School Cadet Club.

Sgt. Boden embarked with the Canterbury Mounted Rifles as part of the Main Body on the 16 October 1914.   He was was killed in action on 22 May 1915.  Trooper McMahon in his letter gives no details of Sgt. Boden's death saying only that   "They were fine fellows, and I thought a lot of them".http://100nzmemorials.blogspot.co.nz/2013/10/a-letter-from-charles-patrick-mcmahon.html

In Terry Kinloch's book 'Echoes of Gallipoli in the words of New Zealand's Mounted Riflemen' I did however find an account of how Sgt. Boden was tragically killed:

'Sgt. Boden and Sergt. Johnstone of the 10th were both shot dead.  The former was entering the trenches from the front at night time, which is certain death, as we shoot at sight so he was shot by one of his own men.'

A truly sad event not only for the Boden family but for the man who fired the shot that killed him, although many may have made the shot and hopefully no one person was attributed to his death.  Sgt. Boden is buried at the Canterbury Cemetery, Anzac Cove, Gallipoli, Turkey.
Posted by Helen Vail at 11:09 AM