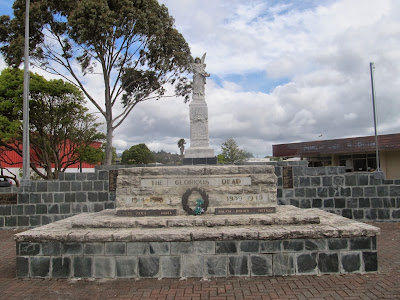 The memorial in its position today 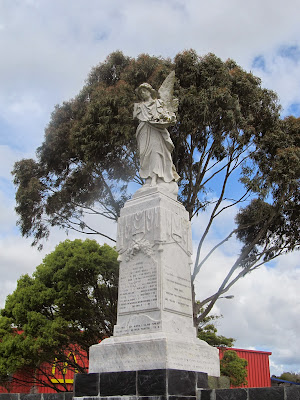 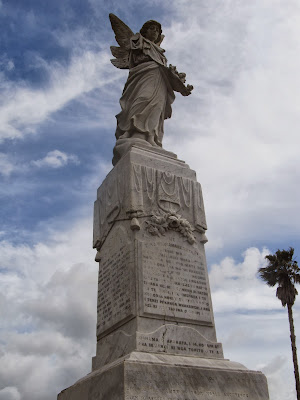 The Kaitaia World War One Memorial was one of the first unveiled in New Zealand on 24 March 1916.  The memorial was the initiative of Riapo Puhipi (Leopold Busby) a leader of Te Rarawa.  The inscription of the memorial is unusually in Maori and English and reads:

'In loving memory and in honour of our sons and relations both Maori and Pakeha, dead or living from the country of Mangonui who willingly offered to sacrifice their lives to uphold the honour of the King and Empire for the Glory of God in this terrible war which began in Europe in August 1914, and has since spread over the greater part of the world.

Splashing through the mountainous waves of the Indian Ocean our brave lads uphold the names of your noble ancestors, seek to avenge the death of your relations that have fallen.  God will give victory to the righteous.'

Today the memorial is part of a memorial to both wars and the names of those lost in both wars are mounted on a wall behind the monument.  Sadly the angel has lost one of her arms and the lettering on the monument could do with some restoration.  I did read an article in the Northern Advocate from last year that an application had been put in to the lotteries commission to raise funds to restore the memorial I hope this was successful.