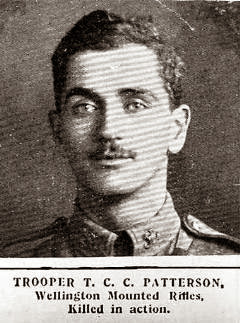 He embarked with the Canterbury Mounted Rifles on 16 October 1914 with the Main Body.   Trooper Patterson died of his wounds on 30 May 1915 in his letter Trooper McMahon recounts how he died.

"Poor 'Col.' Patterson was wounded one evening just before we were relieved by another squadron. I stayed out on the hill with him till twelve o'clock, when Father Dore came with two stretcher-bearers. Poor fellow! He died half an hour after we got him into camp."