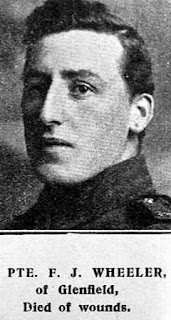 Private Frederick Joseph Wheeler son of Frederick and Helen J Wheeler of Glenfield, Auckland, embarked on the 13 November 1915 with the 8th reinforcements, Auckland Infantry Battalion.  He died of his wounds on the 5 July 1916.

On the night of the 3/4 July 1916 heavy German artillery was followed by a raid on the postion of the 1st Auckland (of which Wheeler was part of at this time) in the L'Epinette sector, France.  Whilst the New Zealanders saw the Germans off there were 102 New Zealand casualties  including 33 whom were killed.  Frederick Wheeler was most likely one of these casualties.  He is buried in the Bailleul Communal Cemetery Extension, Nord, France.  In total there are 4,403 Commonwealth burials in the cemetery.
Posted by Helen Vail at 3:23 PM