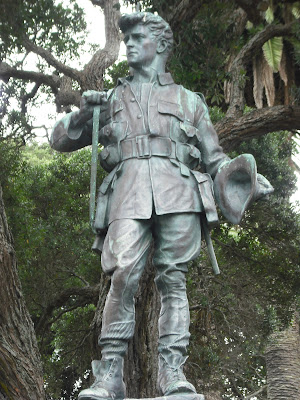 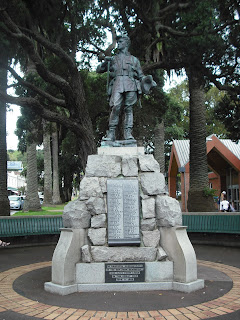 I hadn't visited Devonport in ages not since I last ran the Auckland Half Marathon in 2009.  Devonport has a lovely village feel to it with a lot of history.  The Memorial was excellent.  The 'untidy' soldier (as it is known)  is fantastic the detail in the uniform etc. captures the real essence of the soldier.  At the time of its unveiling in 1924 there were some who were shocked that the soldier should be displayed this way.  I think it is a rather fitting tribute to the and a true interpretation of a soldier of WW1.

The statue was sculptured by Frank Lynch an Australian living in Auckland.  He served in Gallipoli and France and in the book 'The Sorrow and The Pride' it mentions how Frank Lynch would model his fellow soldiers heads in clay whenever it was available.  The model for the soldier was Joseph Lynch, Franks brother.  He was helped by a photograph of Joseph at Galllipoli.  The statue was cast in Bronze in London.
Posted by Helen Vail at 12:51 PM