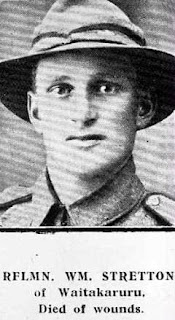 Rifleman William Stretton was a farmer on the family farm at Waitakaruru.  He enlisted on the 29 May 1915.  He was wounded on the 15 September 1916 the first day of the Battle of Flers-Courcelette. William received gun shot wounds to the thighs and later died on the 21 September 1916 aged 25 years. He is buried in the Etretat Churchyard cemetery near Le Havre. 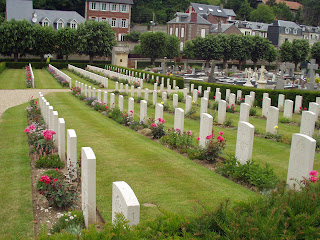 Etretat Churchyard Cemetery
William Stretton was the eldest son of Walter and Eliza Stretton
Posted by Helen Vail at 4:57 PM